From repair to maintenance ～The Need for Periodic Inspections～

"Do you know what a bathtub curve is?"

All cars will break down sometime in the future. Of course breakdowns are a problem, so,

"You want it to work as long as possible without breaking down."

This is a wish surely shared by all people.
But let us think about what is necessary to make a care able to run as long as possible without breaking down.
First, let's think about breakdown occurrence patterns.
If you do nothing to prevent it, all machines are said to break down at the following rates. 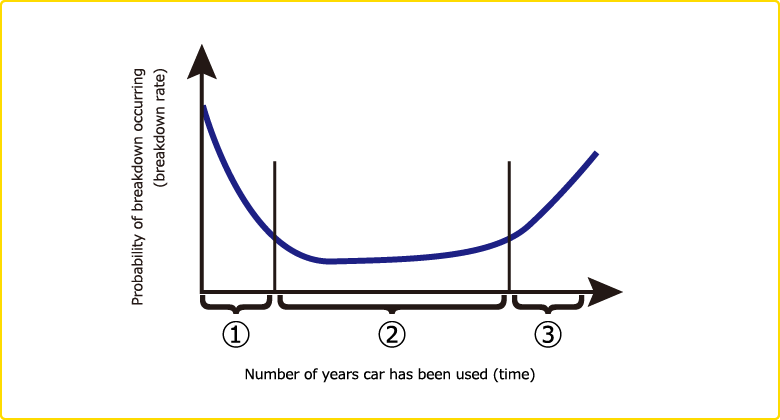 The period during which cars would deteriorate when they started being used and break down due to defects acquired in the manufacturing process, and which has been eliminated in most modern cars. (Concern about this period would seem to be why it was necessary to run-in new cars in the past.)

This is a period of stability after defective products have been thoroughly ruled out during an initial breakdown, breakdowns rarely occur for no reason, and it is thought to be about from when the car is new until the 4th year.

This is a period when wear-down and deterioration of parts has built up causing an increase in breakdown, and how soon this period comes changes depending on how the car is used.

In other words, the important point here is "whether you can delay the onset of the wear-out breakdown period."
Periodic inspections are essential for this.
So next I would like to consider the results of periodic tests.

Now, let's think about effect of periodic test.
If periodic inspections are conducted the bathtub curve will change as below, allowing the car to run for a long time without problems.

A comparison chart of when periodic inspections are implemented 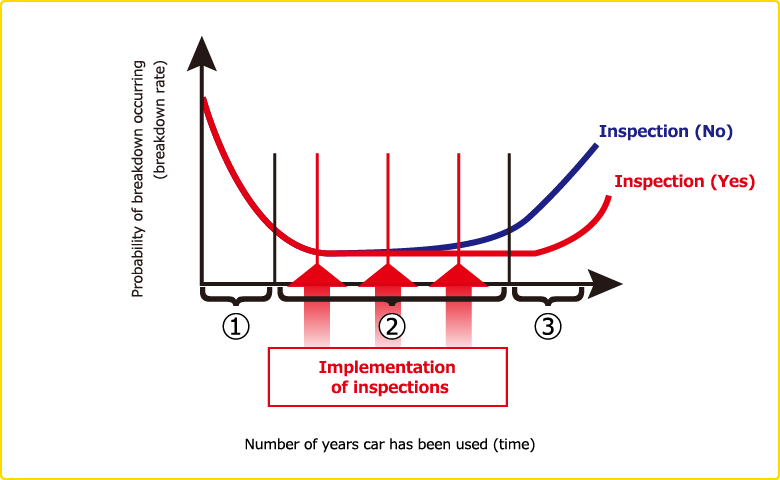 However, as shown in this chart, even if you conduct inspections periodically, the results are not seen until about 5 or 6 years after the car is new, so people tend to neglect them.
People also tend to make the mistake of thinking "it will be the same whether I get inspections or not" because the breakdown rate doesn't change very much during the early period between cars with inspections and those without.

In such times, I don't think many people can afford to change cars only 2-3 years after buying them.
In the coming era, I think it will become vital to implement periodic inspections and maintain cars that are "gentle on the Earth and the wallet" in order to drive pleasantly and with as few breakdowns as possible.
Although cars are convenient, they require taxes, insurance, inspections, oil changes and a wide variety of maintenence, not to mention specialized knowledge.
This is not a problem for those who love cars and consider maintencnce a part of the enjoyment, but if you are one of those who consider cars to be a daily necessity and consumable product and want maintnance to be as smiple as possible, won't you consider the My Car Lease way of having a car?

*For customers who read this far
Thank you very much for reading to the end despite it being so long and uninteresting.